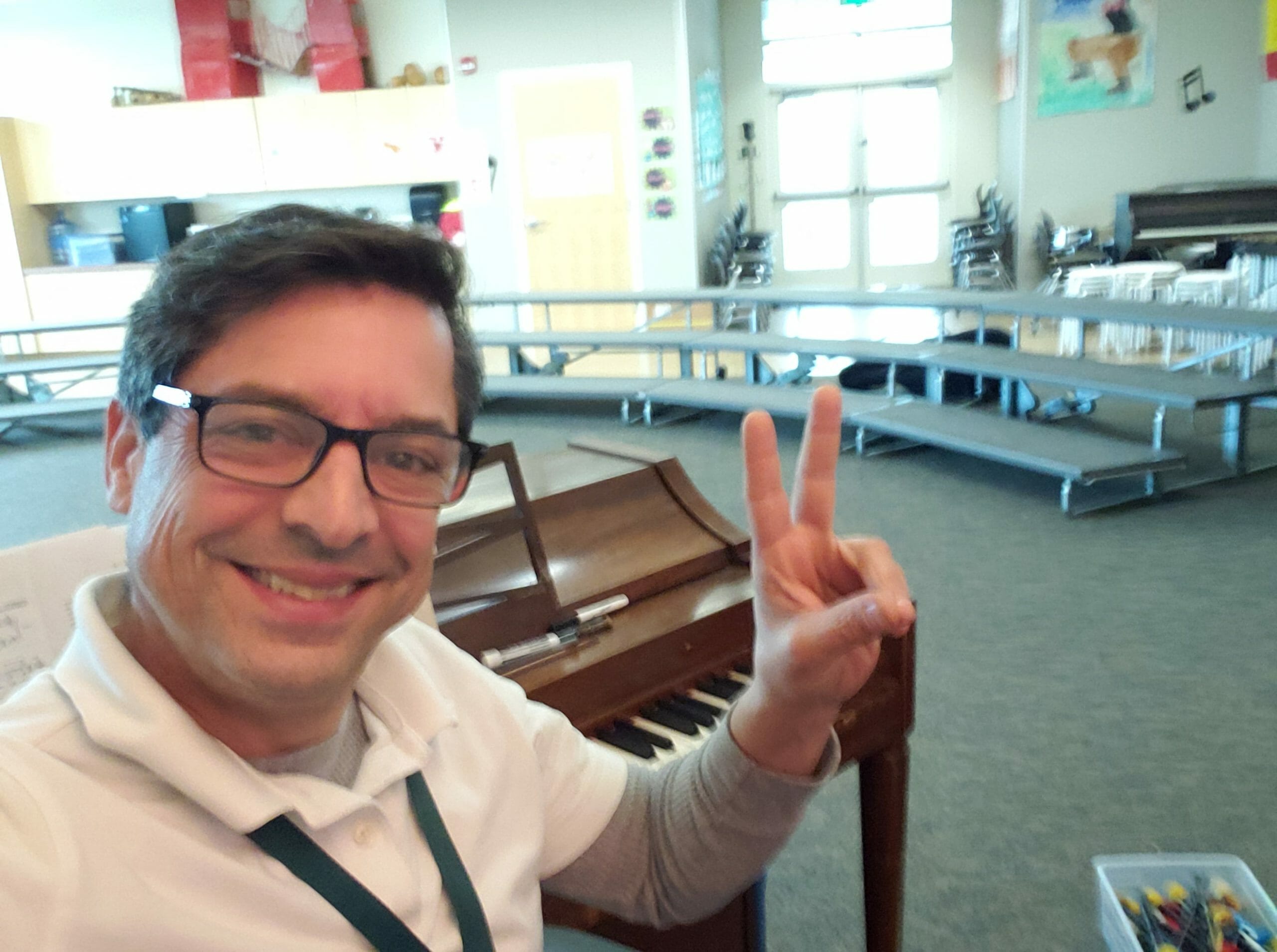 Music Teacher
From the sound of Michael Mares' youth growing up in Alameda, California, it's a shocker he ever became a music teacher.

"We had a singing teacher, Ms. Crooks, who would come to our school, but it was really boring. There were no games attached to it and she made us sing about how much we loved our school. I didn't really love my school," remembers Mares. "I started to really not like music class, even though I loved and wanted to play music. My heroes growing up were the rock band KISS. Ms. Crooks was not KISS."

To add insult to injury, a couple years later, when Mares was a beginning trumpet player in middle school, the band teacher quit.

"I'm a bit ashamed to say this, but it's the truth: It was never my plan, early on, to become a teacher," says Mares, who is a certified Level II instructor inOrff Schulwerk, a music education system developed by German composer Carl Orff and German educator Gunild Keetman. "One day in college, I was getting ready for rehearsal to start, and another student mentioned that she was going to become a music teacher ... she told me about the credential program, and when she said the teachers get summer off just like the kids, I was sold. I said to myself, 'How bad could the kids be? They can't be that bad? Summer off? Where do I sign up?'"

While Mares doesn't recommend such an approach to making career decisions, it certainly worked in his case. He comes to the Mill Valley School District with 17 years of experience teaching middle schoolers instrumental and choral music, and he recently received unanimous superior ratings from the California Music Educator's Association.

To Mares, music education is essential to a balanced education because the mind is fully engaged in music classes.

"(There is) mathematical awareness of time and rhythm, and physical education through movement and body percussion," says Mares. "The science behind sound, harmony, volume and instrument-making gives students many ways their voices can be heard. We view historical, social and artistic impacts through song and dance."

While Mares lists KISS as an early influence, as he matured, he grew to to appreciate the varied likes of Louis Armstrong, Jimi Hendrix, Ludwig van Beethoven, Igor Stravinsky, and Willie Nelson. Inspired by musicians who push the boundaries of musical conventions and norms, Mares gravitates to "the outsiders, the outlaws."

"Sometimes, a musician has to go to great lengths to extend their voice or sound," he says. "They have to copy and examine and copy some more, then re-examine. At that point, they can begin to create the sounds they hear inside themselves."
And, he emphasizes, musicians -- of any age -- should not be afraid to make a mistake. After all, the biggest hurdle for a young musician in elementary school is often overcoming the fear of failure. Mares is sensitive to that fact.

"Mistakes are normal. It's hopefully how we learn," he says. "Sometimes the mistakes tell us the music is a bit too hard, or that maybe we didn't spend enough time on it. Sometimes it's out of our control. Rebounding is really the confirmation the moment is gone."

Mares knows of what he speaks. To this day, he remembers a moment in his college days as a percussionist in the the wind ensemble. He was playing the triangle, and his sole job was to play the piece's final note. Just one. That note approached, the conductor queued Mares, and ...

"I missed the note entirely," says Mares, who had prepared to strike the triangle but somehow stopped short, less than 1/8 of an inch from the instrument.

"The hard part, is owning up to it and making strides to avoid doing it again," says Mares.

From our view in the orchestra seats, it looks like Mares has done just that.