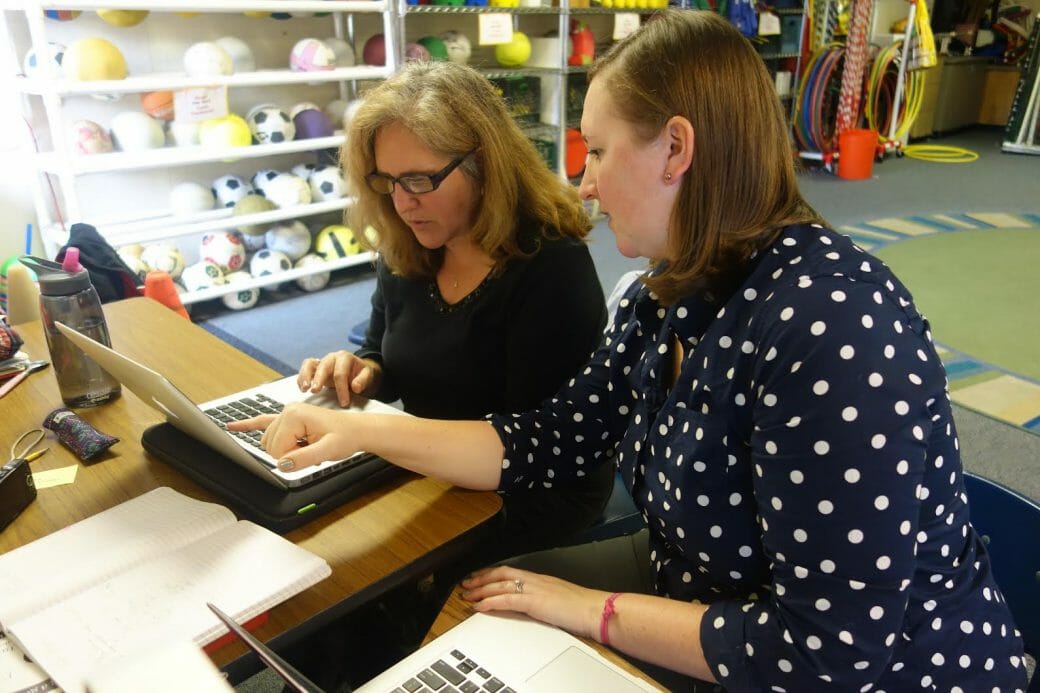 It’s hard to believe that Kate Sprague, Mill Valley School District’s new technology coach, has only been in action for about a year now. Because if you ask her, her days are sometimes only slightly less frantic than those of that explorer who’s trying to get away from those demonic apes in that Temple Run game your kids like to play on your smart phones.

Luckily, Sprague thrives on her new job’s pace. “Technology in education has long been a passion of mine,” says Sprague, a former fourth grade teacher at Edna Maguire and a native of Longview, WA. “I’ve been involved in tech at the school sites and district levels in all my years in the district since I came here in 2008. Basically, I help teachers integrate technology in their classrooms, and that includes supporting their instruction, including training, researching things for them to use, and coming up with ideas for them.”

An example of Sprague’s expertise is at work on a recent afternoon in Lori Adessa’s classroom at Tam Valley.  When most Mill Valley School District parents think of Lori Adessa – Mrs. Adessa to the kids  – they think of her catchy Halloween bobbing-for-apples song. They think of her deftly strumming her guitar and leading their children as they sing in French, curtsy and bow, and trill about a bridge in Avignon.

What they most certainly don’t think of is the “student” Mrs. Adessa who has come this day, guitar and MacBook Pro in hand, to enlist the help of Sprague, a 2004 graduate of the University of Puget Sound.

Sitting in front of a MacBook Pro, Adessa explains to Sprague her simple desire: To use the new, district-provided programs on her MacBook Pro to create her teacher web page and to separate all her classes by grade, to post pictures and to provide links to video and lyrics and performances.

Adessa cuts to the chase.  “I was like, ‘How do I do this?,'” she says to Sprague, talking with hands to express her eagerness to learn.

Sprague is in the sweet spot of the desired demographic for such a technological position. Born to parents who embraced technology and had Compaq and Apple IIe computers in the house, Sprague remembers programs on floppy disks, torturous dialup connections, hotmail email addresses and direct messaging through ICQ.

“It’s interesting to see how far it’s all come,” says Sprague, noting that there have been big changes even since 2008, the year she first landed a job in the MVSD, and the same time that her husband transferred to graduate school at the seminary in San Anselmo. “Teachers had laptops when I came in, but access to computers for students has improved significantly, as has the flexibility as to how the teachers are using that technology in terms of apps, software purchases and lap tops.”

That’s a fact. While Kiddo! funds technology support specialists like Sprague, it also helps to fund the lease-to-own contracts of laptop computers for the district.

The benefits reaped from such copious resources are easily seen. Whether it’s a first grader bringing home XtraMath to practice addition on an iPad, or an Edna Maguire third grade teacher making a documentary with the students using iMovie, it’s all invigorating to a tech-head like Sprague. Even the tedious stuff is fun, she insists, as she lists her top requests of late: Google Drive training, website building assistance and personal help with classroom devices like Apple TVs or projectors.

“It’s a little cliche, but it’s like teaching man to fish,” she says. “You teach them how to build the web site and then they can do so much more… go back to the site and say, ‘Oh my gosh, we need music!’ and the teacher figures out how to embed a song. Or the art teacher who has tons of galleries. Our teachers are all doing a great job using the web sites to communicate.”

The only problem according to Sprague?  “There’s so many of them, and only one of me,” she says.

Meanwhile, back in that Tam Valley classroom, Adessa is pointing and clicking on pictures from a Kindergarten performance that she’s trying to have go live on her teacher web page. Pausing mid-picture-selection, Adessa says having Sprague on board is way better than recent history’s alternative.

“It’s been so frustrating not having anyone to go to,” says Adessa. “It’s really nice to have one person to go to.”